Never Run Out of Hot Water With a Tankless Water Heater April 4, 2019 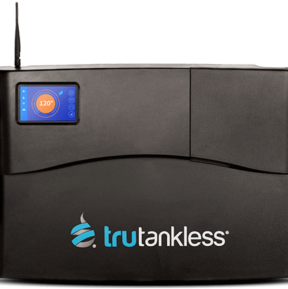 Nothing is worse than running out of hot water when your family is getting ready for school, work or play. Which is why many households are converting to a tankless hot water heater and replacing their traditional 40-gallon tank that sits in the corner of their garage.

Silva and his team of 11 plumbers install between seven and 10 tankless water heaters a month, and that pace is accelerating with the introduction of a new tankless system powered by electricity.

“Tankless systems for homes with gas have been around for many years, but it’s only recently that the technology has become available for electric heaters,” said Silva. “We work with a manufacturer out of Arizona called trutankless, which has a fantastic system that even has an app that makes it fun and easy to keep track of your water usage and to send alerts.”

The trutankless system is adaptable for homes from one bathroom to four. It provides endless hot water 24 hours a day, for half the cost of a traditional hot water tank.

Another benefit of a tankless water system is that it mounts directly on your garage wall, freeing up space on the floor that a traditional water tank requires.

“The trutankless system is contained in a neat, 2-foot by 2-foot square that juts out less than a foot from the wall. The unit is hardly noticeable and really cleans up the look of the garage,” said Silva.

Manufactured in Arizona, the trutankless system is a U.S. company that boasts an outstanding service record.

“Cornerstone has installed over 100 trutankless systems in the past two years, and we’ve had very few service issues,” said Silva, who adds that the system is virtually maintenance-free.

Many homeowners decide on a tankless hot water system when their old tank begins to leak, or no longer keeps up with the family’s hot water demands.

“After comparing the cost of replacing their old water tank, which is 100-year-old technology that is very energy inefficient, most homeowners switch to a tankless system because it costs 50 percent less to operate, plus gives them hot water on demand with absolutely no fuss,” said Silva.

Traditional water tanks work 11 hours a day to keep water hot, even in the absence of hot water demand, and wear out and need to be replaced every seven to 10 years. Replacement cost to install a traditional hot water tank is between $1,200 and $1,500.

By comparison, Silva said a tankless system costs about $3,000, which includes upgrading a home’s electrical system to accommodate the installation of the trutankless system, as well as a plumber.

“Cornerstone always sends a plumber and an electrician to the home for a tankless water system install. This is not a do-it-yourself project, and requires both electrical and plumbing permits,” said Silva.

Most Cornerstone installs are completed in less than a day, and there is almost no inconvenience to the family. Same day installs are scheduled for emergency jobs, especially when a family’s old water tank starts leaking.

The manufacturer of the trutankless system reports that $8.1 billion could be saved annually in the U.S., if American families switched to tankless heaters.

“Tankless technology also eliminates corrosion, leaks, scalding and explosions that sometimes occur with old-style tanks, all which can be hazardous to your family,” said Silva.  “The trutankless product is something that Cornerstone is very proud to offer —a sophisticated solution that gives families something they dream about – endless hot water.”

Ready to say goodbye to cold showers? Call Cornerstone today or contact us online and check out our exclusive online discounts for a new hot water heater and other services for your home.